The Homeland of the Rafts men: the Middle Region of the Black Forest

The charm of this region lies in a variety of attractive country sides. There is the "Ortenau" with its vineyards reaching down into the Rhine valley, but there are also areas covered with woods. You will come across small towns with half-timbered houses built in the traditional way and ruins which hint at a diverse past. To the east, the "Baar", a highland region, is situated, which stretches out to the Danube and the Neckar.

In the middle region you will find things typical of the highland area of the Black forest, e.g. north of Gutach there is an ancient farmhouse of a rich farmer (the "Vogtsbauernhof") and the open air museum with many ancient farmhouses of the region, put up here for people to see how the peasants lived in the old days.

At the beginning of the last century rafts were still quite common on our rivers. From the 15th to the 20th centuries rafting was good business. The Black Forest was the biggest German provider of wood. Most of the rafts on the river Rhine consisted of fir trees and pine trees. The rafts men were highly respected men in the Black Forest. These daring men went down the rivers to the mouth of the river Rhine on their rafts and made the Black Forest known . In 1828 Wilhelm Hauff wrote the "Holländer Michel", a story dealing with life on a raft. 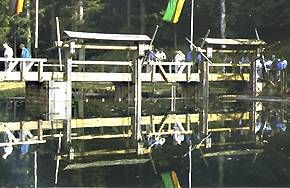 > The Regions
> The Black Forest is divided into three areas
> Famous Roads
> Homeland of the Rafters
> Lakes and the Highest Mountain
> Glaciers and Lakes: The Primeval Landscape
> The Upland Moors: The typical landscape
> At the Schluchsee
> Lake Titisee
> The Höllental
> The gorge of the Wutach
> The Belchen
> The Schauinsland
> The mountain called Feldberg
> The lake called Feldsee in the Feldberg massif
> In the region called Hotzenwald
> Four valleys in the Hotzenwald region
> The fifth valley in the Hotzenwald